We like to keep visitors up to date with any forthcoming interesting classic car auctions as this provides you with the opportunity to add to your classic car collection. You may be interested to read that a Scottish Tory peer will be selling some classic cars in the not too distant future. 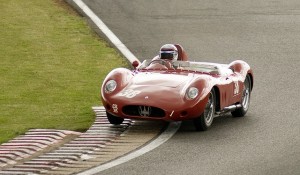 Irvine Laidlaw, who is a Scottish peer as well as being a businessman, is looking to auction a number of rare classic cars that could net him in excess of £17 million.

Irvine Laidlaw is the son of a mill owner who made a substantial amount of money through publishing and, in 2005, he also sold the Institute for International Research for around £714 million. It is believed that at this present time he is worth somewhere in the region of £770 million.

RM Auctions are to be responsible for auctioning the cars that include a Jaguar D-Type dating back to 1955 that has been driven by Peter Sutcliffe, Paul Frere and Duncan Hamilton all of whom were racing car drivers. The vehicle could be seen on the track at the Nurburgring and also here in the UK at Silverstone. If it achieves a sale price of £6 million it will become the most expensive British car that has ever been sold at an auction.

You will be pleased to hear that there are many other classic cars to be auctioned from Irvine Laidlaw’s collection. These include a delightful 1965 Porsche 904/6 that took part in the Le Mans race back in 1965, a Ferrari 275 GTB/C from 1967, a Maserati Tipo 61 “Birdcage” as well as a Maserati 250S that was driven by the likes of Jim Hall and Carroll Shelby – the later is expected to realise between 2.5 million to 3 million pounds.

Apparently, Lord Laidlaw has stopped racing classic cars and is not someone that just wants to admire the cars in his garage. He prefers that they are used – hence his reason for selling them.

The cars are to be auctioned from the 7th to 9th September 2013.

I am a full time insurance underwriter with a love for writing. I work in the UK at a classic car insurance company. My other hobbies are going to the gym and aerobics (when I am not looking after my 3 year old daughter Jessie.
View all posts by Anne Jacobs →
This entry was posted in Uncategorized. Bookmark the permalink.