Many of you will have heard of Rowan Atkinson who is 60 years of age. He is an actor appearing in such things as Mr Bean and Blackadder. He is also a lover of cars including classic ones. 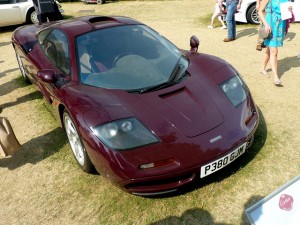 Rowan Atkinson is to sell his McLaren F1 sports car

He currently owns a purple McLaren F1 that he has had two accidents in over the years. He bought the vehicle back in 1997 for the large sum of £540,000. Mr Atkinson is not one of those people that buys a classic car and leaves it locked up for a good part of the year. No, he loves to take it out and has done tens of thousands of miles in this great looking sports car.

Back in 2011, he unfortunately smashed the car into a tree that resulted in an insurance company paying out in the region of £910,000 to have it repaired by McLaren. At that time, this was believed to be the record sum that had been paid out for the repair of a car.

Anyway, he has now decided to part company with this sleek looking vehicle and it is to be sold by Taylor & Crawley for in the region of £8 million. It has done about 41,000 miles.

The sports car has a 6.1-litre engine that is capable of getting from 0 to 62mph in only 3.2 seconds as it heads for a top speed of 241mph. Unfortunately, it only does about 15 miles per gallon and it, we suspect, will not be cheap to have serviced or to arrange classic car insurance. Therefore, anyone buying this classic sports car will not only need to have a significant amount of money to buy it but also to keep on the road.

It was one of only 64 such cars built which adds to its rarity and obviously its value and we suspect that there will be a great deal of interest in this wonderful classic vehicle.

I am a full time insurance underwriter with a love for writing. I work in the UK at a classic car insurance company. My other hobbies are going to the gym and aerobics (when I am not looking after my 3 year old daughter Jessie.
View all posts by Anne Jacobs →
This entry was posted in Uncategorized and tagged Classic Car Insurance, Classic Cars, McLaren FI, Rowan Atkinson. Bookmark the permalink.