The Morris Minor is a delightful classic car that is full of character. Its saloon shape is unmistakable and it is loved by many. It was often seen out on the roads 40 to 50 years ago especially on a Sunday afternoon as families would pack a picnic basket and venture out into the countryside. During the week, it would be used to drive to work. 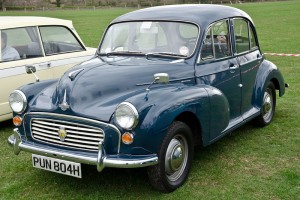 Well, who would have thought that a Morris Minor costing £656 back in 1968 would sell at auction for £17,000. That is just what happened at CW Auctions.

The Morris Minor 1000 in question had been lovingly maintained by its owner but had spent much of the time locked away in a garage. It only had 190 miles on the clock. It was in wonderful condition and was bought by a Morris Minor enthusiast from York.

Interestingly, the car was only forecast to go under the hammer for around £7,000 to £10,000 but, apparently, there was a great deal of interest including from overseas. It is great to see this classic car being purchased by someone in this country and let us hope that it remains here.

As can be seen, this classic vehicle has certainly increased in value over the years and it will be interesting to see if it continues to do so in the future. We will let you know of any other interesting classic car auctions.

I am a full time insurance underwriter with a love for writing. I work in the UK at a classic car insurance company. My other hobbies are going to the gym and aerobics (when I am not looking after my 3 year old daughter Jessie.
View all posts by Anne Jacobs →
This entry was posted in Uncategorized and tagged Classic Cars, Morris Minor 1000. Bookmark the permalink.