This coming weekend, what is forecast to be the largest classic car auction in the UK, is scheduled to take place in London. The auction will include a significant collection of Mercedes-Benz and are expected to be sold at RM Auctions’ Battersea sale that is due to take place on the 8th September.

One anonymous collector from Europe is selling seventy four Mercedes-Benz made up of a variety of different makes and models that even includes a classic ambulance built in 1952 worth in the region of £50,000 to £70,000. It is estimated that they will realise in the region of £20 million. Included in this fleet of vehicles are also convertibles, sports cars and limousines.

The most expensive of the vehicles are two Mercedes 540k Cabrio A that date back to 1938 with these expected to achieve a sale price of anything between £1.3 million to £2.5 million each. There is a Mercedes-Simplex 60 HP Speedster Tribute dating as far back as 1905 making it the oldest car in the auction that may exceed a sale price of £300,000. 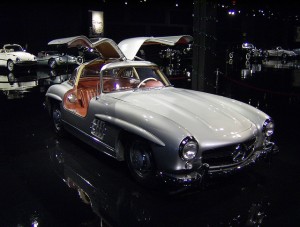 At the auction will be a number of Lord Laidlaw’s sports cars that include Rolls- Royces and Ferraris that may realise around £17 million. The previous record auction sale took place earlier this year at the Goodwood Festival of Speed when sales amounted to £36 million.

No doubt some of you will be looking to attend what promises to be a particularly special classic car occasion.

I am a full time insurance underwriter with a love for writing. I work in the UK at a classic car insurance company. My other hobbies are going to the gym and aerobics (when I am not looking after my 3 year old daughter Jessie.
View all posts by Anne Jacobs →
This entry was posted in Uncategorized. Bookmark the permalink.