A 1921 Vauxhall 30/98 E-Type Tourer, a wonderful classic sports car, is shortly to be auctioned by Bonhams and is expected to achieve an excellent price for the current owner. This particular car has a red leather interior and blue/black bodywork. 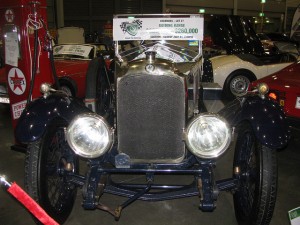 This car has an interesting story to it. Whether that will add to its value remains to be seen on the day of the auction that has been set for the 26th June 2015 at 14.00 pm.

Apparently, this vehicle came to light when someone purchased a garage in Great Dunmore in Essex in the 1930s. The car was in a corner of the building and the new owner of the garage was told that it came with the property as it had been left by its previous owner who had not come back to pay their bill of £7 and 10 shillings. That sum is equivalent to about £500 in today’s money.

The Vauxhall E-Type Tourer was dismantled and did not come out of storage until around 1991 when it was sold. The new owner then spent many years restoring this delightful vintage vehicle and it took part in Vauxhall’s centenary celebrations in 2003. Although it is a racing car, it has never been used for that purpose by the current owner but has been taken out for family outings.

This car may fetch as much as £250,000 so, if the person back in the 1930s who left it having not paid their garage bill is alive today, they would be feeling somewhat “down in the dumps”.

This is reportedly an iconic classic vehicle to own so, if you are interested, why not get along to the auction. Let us hope that the new owner makes good use of the car as it would be a shame to find that it ends up being locked away never to be seen again by members of the public for years to come.