RM Sotheby’s is to hold the Villa Erba auction on the 27th May in Italy at which there are a number of classic cars for sale. So, if you have an interest in such vehicles and would like to combine that with a few days in a lovely part of that country why not get along to the event that takes place every couple of years. 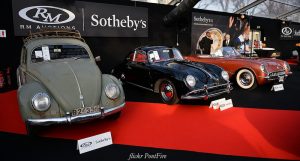 You can see a full list of the classic cars on RM Sotheby’s website but we thought that we would mention some of them. For instance, there is an Alfa Romeo 1900C Coupe by Carrozzeria Touring dating back to 1952. It is right hand drive and spent much of its early life in England before finding its way to Italy in 1984. This dark green vehicle was restored some 10 years ago and has an estimated price of between 275,000 to 325,000 euros.

There is an Aston Martin V8 Vantage Zagato that was built back in 1987 with only 15 of these left hand drive models being constructed. It has an extremely powerful 432 bhp engine and has done slightly more than 4,000 kilometres which is extremely low mileage. It has an estimated sale price of between 400,000 to 500,000 euros.

There are a number of classic Ferraris being offered for sale with one being a 1965 Ferrari 275 GTS by Pininfarina. It was in fact only the 10th Ferrari 275 GTS built. It only has about 54,000 kilometers on the clock. Owners have resided in Italy, England and lastly in France. It has an estimated sale price of between 1,600,000 to 1,800,000 euros.

Presumably, any new owners of these vehicles will make sure that they have adequate classic car insurance in place.