This has not been the first time that a classic car has been discovered in a barn and we are sure that it will not be the last but it does seem incredible that such vehicles can be left hidden for, potentially, such a lengthy period of time. It seems such a shame that these classic cars remain out of the public eye for so long when they could have been admired by so many. 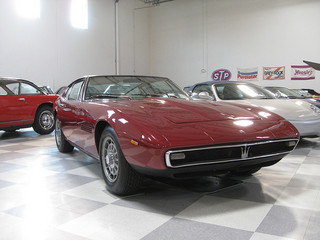 Anyway, the latest model that we have heard about that has been locked out of sight for in excess of 10 years is a 1968 Maserati Ghibli. It was discovered in a barn and is to be offered for sale at Silverstone Auctions’ International Trophy on the 17 May.

This delightful classic car from 1968 was uncovered back in February of this year having spent around ten and a half years stored away. The vehicle will need a lot of tender loving care as it requires a full restoration. It is estimated it will be sold for between £12,000 to £16,000.

The Ghibli came onto the market back in 1967 following the launching of this sleek looking car by Maserati at the Turin Motor Show in the previous year.  Interestingly, it is one of only 276 fixed heads to have been built. The Spyder version came on the market in 1969 and was highly sought after by those that could afford one.

Nick Whale, who is managing director for Silverstone Auctions felt that, having received some restoration work, this classic car could return to the roads as being one of:”….the most beautiful Maserati’s to be built”.

It has to be said that, in the guide price range quoted above, this does seem to be a particularly good opportunity for a classic car enthusiast to pick up an outstanding make of vehicle at a reasonable price. Obviously, someone doing so will no doubt need to research the cost of the required restoration work. We look forward to seeing it back on our roads in the fullness of time.