Classic Cars Destroyed As A Result Of Car Scrappage Scheme

For those of you that were not aware of the Car Scrappage Scheme (also known as the Vehicle Scrappage Scheme) we will briefly provide a recap. It was introduced here in the UK back in 2009 and enabled people that had owned a car for at least 12 months and that was a minimum of 10 years old to benefit by £2,000 by exchanging it for a new vehicle and allowing the old one to be scrapped. 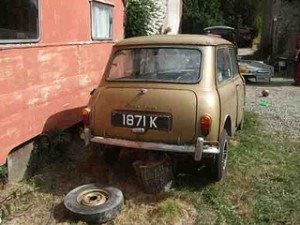 A number of old Minis were scrapped

1. The Government paid £1,000 towards the cost of you buying a new car from certain car manufacturers.
2. The car manufacturer agreed to knock £1,000 off the list price of the vehicle.

The scheme resulted in almost 400,000 vehicles being scrapped.

This all sounds great but it has come to light that quite a lot of cars that could be described as classic cars were got rid of by their owners under this scheme. No doubt some of them did not realize the value that some of those cars could now be worth.

Apparently, around 100 Porsches were got rid of in exchange for what amounts to a value of £2,000. Over 30 Ford Capris were disposed of. There were about 450 Land Rovers that were scrapped. In excess of 400 Minis were scrapped.

For those of you that are lovers of such vehicles, you will no doubt be saddened to read the above. You will know that a number of such cars over 10 years of age are worth more than £2,000 even before they have been fully restored.

Hindsight is a lovely thing but some of those people that decided to get rid of their classic cars under the above scheme are possibly regretting such a decision. Unfortunately, it is too late to do anything about it now as those vehicles will have been scrapped but it is certainly worth remembering this in case the Government decides to do something similar in the future.